do
you think
that the pyramids
were constructed to make
us wonder about Egyptian technology
or would those ancient Egyptians engineers
wonder why modern technology isn’t more advanced?

It’s COLD outside! The Kelvin scale
shows minus twenty two
a scientist said “that can’t be!”
I swear though that it’s true!
I saw a polar bear out there
it’s fur had turned all blue
so I am gonna stay inside
that’s where I think that I will hide
(I couldn’t go out if I tried
the door is frozen too!)

In the part of Canada where I live, we have been experiencing cold weather worse than any in the last hundred years or so. We’ve been hitting temperatures (including the wind chill) colder than -50 C (about -60 F)(OK…-22 K might be a slight exaggeration). With weather this cold, I need to turn to a bit of humour to “warm things up a bit”. Also, there are no polar bears in this area…but I’m pretty sure that if there were, they would be turning blue!

For those not familiar with the Kelvin Scale, it is a temperature rating system where 0 represents the coldest temperature theoretically possible (at 0 K, all atomic motion would stop), so minus 22 K is scientifically impossible

The reno guys are here again
To fix all they’ve done wrong
They’ve been here far too many times
I hate this dance and song
Each time they come I have the hope
“This time they’ll do it right”
But have the feeling in my gut
That I’ll still have to fight
For them to paint things properly
To fix each mess they’ve made
‘Cause so far every job they’ve done
Would get a failing grade
But maybe I’m to hard on them
Perhaps I shouldn’t grouse
They’ll do it right this time, I’m sure! …
…They just blew up the house… 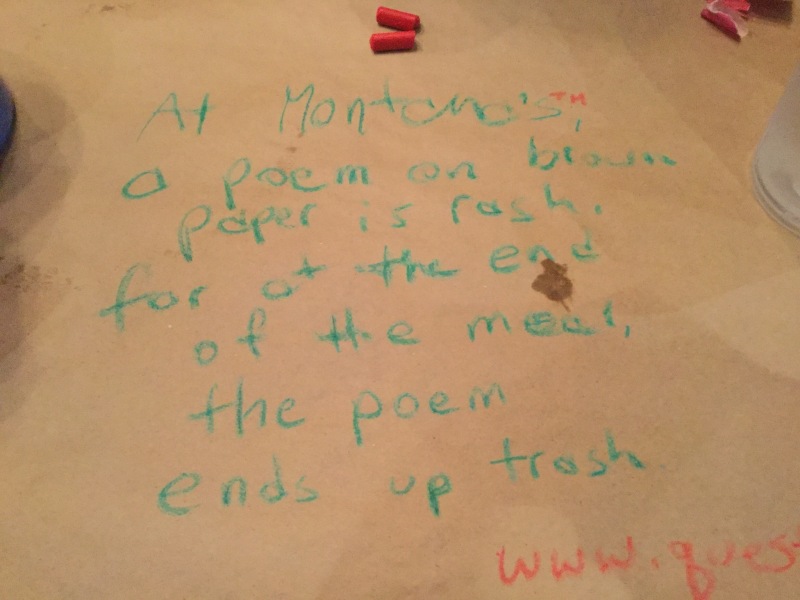 At Montana’s™,
a poem on brown
paper is rash,
for at the end
of the meal,
the poem
ends up trash

a bit of “random poetry” that I wrote today at Montana’s.  I always wonder if the people who work there ever read what is written on the brown paper “table cloth”, or if it just ends up in the trash can.

contents under pressure
be careful with this load
don’t bump or jostle, jar or jolt
or this jar might explode
don’t shake or rattle hit or bang
don’t place it under strain
my mind’s the thing that’s pressurized
so please don’t jounce my brain
but if you can, please, find the valve
that makes the pressure stop
please open it, ignore the hissssss…
it’s better than a POP

our family has had a lot of things going on recently with our house. Today, one of those issues is (hopefully) going to be resolved…and hopefully will bring our stress level down at least a touch.
Written for the “warning labels” prompt at napowrimo.net

Why am I so misunderstood
And seen as foul by my foes?
I fight for love. Is that not good
I love my princess, goodness knows!

I’m but a lowly Koopa King
Don’t I deserve to woo Ms. Peach?
I’d give to her a lovely ring
But when I try, oh how she’ll screech

That Mario, Luigi too
Both try their best to keep me down
And though my love is just and true
Their med’ling causes me to frown

So when I see them on a romp
I’ll finish them with one big stomp!

At napowrimo.net, the prompt today is to show the humanity of a villain, but also to show that they are still villainous.

At NaPoWriMo.net, we have been encouraged to make a list poem of “made up titles”. Here’s mine:

Adventure Pics like “My Blue Pen” are rarely ever shown
‘Cause most folk prefer comedies like “Staplers That I’ve Known”
“My Calculator Glows with Glee” is showing all this week:
(a foreign film with subtitles, but all the talk is Greek)
“Green Highlighter”: a thriller film will keep you up at night
but if you prefer romance, then see “Paper Sheets of White”
My fav’rite flick I’ve seen all year is “Six Line Telephone”
it is a documentary that stars one Sly Stallone
Of course, there is “My Desk’s a Mess” – a true biography
you wonder who it is about? Well clearly, it’s ’bout Me!

I wrote the following a few years back, but thought it worth repeating.

Everyone has heard of the Irish Leprechaun – the short little, mischievous, greedy dudes who look for gold at the end of the rainbow.  So how did this story begin?

Back about 1500 years ago, there was an Irishman by the name of Dougal O’Connell.  Dougal was rather short and stocky compared to most men in Ireland at the time, but that wasn’t his most serious problem.  His biggest problem was his greed.  Dougal O’Connell was a prospector by trade.  He seemed to be able to sniff gold out, wherever it might be found.  While other prospectors might find a nugget here or there, O’Connel seemed to bring gold home by the bucket full.  Whenever another prospector inquired as to Dougal’s success, he would give an evasive answer such as “look at the end of the rainbow…maybe you’ll find a pot o’ gold there!”

He also had a rather annoying habit of jumping into the air and kicking his heels together everytime he came upon an especially large lode.  This habit gained him the nickname of “Leaping O’Connell”.  Eventually, his townsfolk started referring to his entire family as “The Leaping O’Connell’s”

This story is just as reliable as the pot of gold at the end of the rainbow!

the first two lines of this came to me at about 4am last night when I got up and discovered that the toilet required plunging…so if you change “take” to “use” and “plunge” to “plunger” in all the even numbered lines, the poem becomes more literal 🙂 Of course, it sounds a whole lot more pleasant if you read the poem the way it is written and ignore the clogged toilet bit (by the way, it was a minor clog…no waterfalls were involved…at least not this time.

folks are hunkered down
in bunkers ‘neath the earth
but one brave dude still mows his lawn
and whistles tunes with mirth
“storms won’t stop my chores”
he tells his friends, “becoz’
I really want to go and meet
that wizard guy in Oz”

a few days ago, a tornado passed near the town of Three Hills, Alberta (Canada).  One brave (insane?) guy decided to continue mowing his lawn, and his wife took this picture.  When asked about why he would continue doing yard work, he told reporters, “I was keeping an eye on it”.  As far as I know, he wasn’t really hoping for a free ride to Oz.

Sharing this with dVerse, where the Quadrille prompt this week is to use the word “storm”

A Visit With Sandra

Read by four out of five drunken monkeys, written by the fifth.

The Art and Craft of Blogging

Writing in the corner (of my cluttered mind)